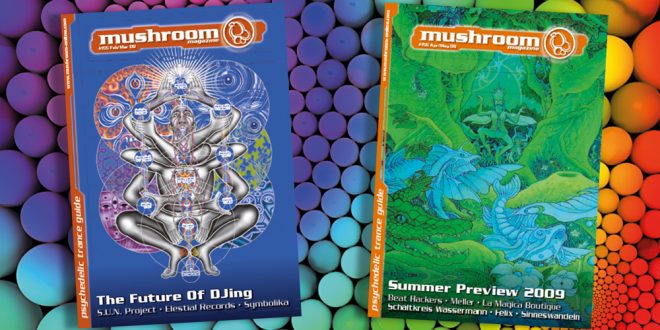 
“Stylistic variety has long become a major aspect of Trance festivals: There’s no fear of crossing the borders of other genres, and that’s why Trancers encounter a great bandwidth of interesting dance music.” According to the results of a reader’s survey that is presented in this very issue, 29% wish for more Techno, Minimal and Progressive House at festivals. For instance, back in 2008 we could actually hear tracks like Thomas Schumacher’s “Red Purple” at Boom’s Dance Temple. Today such a stylistic variety is everything but common – probably because the Trance genre has become quite diverse in itself.

The Future of Djing is a main subject:
“It’s not that long ago that those playing CDs were ridiculed by their vinyl playing colleagues. A real Dj, they would say again and again, plays vinyl! CDs are only for those who can’t actually DJ!” The very same argument later occurred between CD DJs and laptop / USB DJs.
Both of them have generally no idea anymore how to keep two spinning vinyl records in sync.
But can we really reduce DJ culture to this skill?
Also, which Trance DJ knows actually how to scratch…?

“Being marketed as a legal cannabis supplement, Spice became insanely popular last year – not only for smokers.
The pretty intense high you get from this stuff is provoked by the synthetic substances CP-47,497 and JWH-018 which are very similar to the natural THC, both chemically and in terms of intoxication effect. Mid of January these two substances became controlled substances, in other words illegal.”
MXE, Bromo-DragonFLY, C-3PO… research chemicals, sold as some sort of incense stick or bath salt, used to be and still are an appealing option for legal highs. However, they come with a high price tag:
What these new substances do to you and your body on a long-term basis is completely unknown.