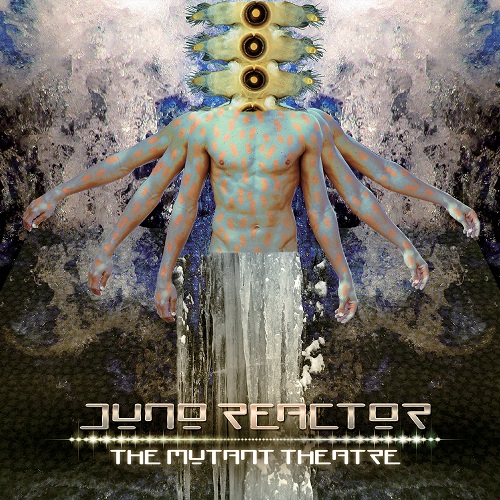 It was a long two years, but the highly anticipated newest release from Psy/Goa Trance pioneers JUNO REACTOR has at last arrived, and I gotta say, it was well worth the wait.  The Mutant Theatre, inspired by the stage show of the same name, exemplifies why Juno Reactor mastermind Ben Watkins is THE undisputed master of his craft; no one can and should even attempt his genre-defying aural adventures. What truly sets this album apart from the rest of the electronically produced dance music of every sub-genre is the fact that it truly cannot be categorized; yes, there are elements of trance, but there are also incredible layers of traditional instrumentation with modern, experimental elements, all tied together with an edgy sci fi sensibility.

A little about The Mutant Theatre, if you’re not familiar with the fast developing stage phenomenon: created in 2016 for the Ozora Festival, The Mutant Theatre is made up of two Russian dance groups, Stigma Show and Agnivo, who utilize dazzling, elaborate costumes made up of mirrors, thousands of LED lights, lazers, and all manner of sci fi inspiring imagery. The stage show is, ultimately, a Vegas ready spectacle–think Cirque du Soleil meets The Matrix–and is in fact, at last, coming to Vegas in August as the featured entertainment at 2018 DEFCON at Caesar’s Palace.

Now on to the album. First and foremost, this is an electronic dance album for adults; this isn’t modern EDM, it’s MUSIC. The Mutant Theatre can easily fit in at any modern, upscale club, at any high end fashion or social event, or as background music in any setting. It’s high energy and uplifting without being annoying or distracting.

The Mutant Theatre starts out strong with “Return of the Pistolero,” with world renown German-Spanish flamenco guitarist Amir-John Haddad showcasing his incredible string skills layered with uplifting feminine vocals, chants, and bouncy synths. The track alternates between being rave and world music (and I mean WORLD, this song contains influences from all over the world), all held together with Juno Reactor’s trademark sci fi influence, but there’s no sense of disjointedness that could easily happen in so ambitious a song. Already a fan favorite, “Return of the Pistolero” is unquestionably a shining example of how music can and should be constructed of disparate and seemingly unrelated elements.

Next up is the previously released “Our World,” a dark and foreboding track that opens with an almost industrial beat and the ominous “Our world will never feel quite the same, again” before dropping to a pounding techno beat interspersed with an almost Afrikani drumbeat. The phrase repeats, layered with female vocals, all the while maintaining a consistent rhythm that’s wholly danceable.

The third track, which saw a video release earlier this month (with free download of the video edit HERE), “Let’s Turn On,” was directly inspired by one of the costumes:

‘Let’s Turn On,’ inspired by the 3000 LED, wifi controlled costume designed by Stigma’s (one of the dance troupes that comprise The Mutant Theatre) Sasha, is a trancification of my love for ’70s disco, a fusion of my musical style and tastes.” – Ben Watkins

A more straight forward dance track, “Let’s Turn On” is almost wholly electronic, modern disco even, with more lyrical content from Shpongle vocalist Michelle Adamson.  “Let’s Turn On” is a definite dance floor burner but still a carefully constructed and layered track that is probably the most pop accessible of the album.

The fourth track, “Dakota,” written in collaboration psy-trance group UnderCover, was inspired by and in turn pays homage to this last year’s Dakota Pipeline Protests. Juno Reactor has released a 2 minute snippet of the track with live video, as well:

“Shot at a Live Show in London, England on February 23, 2018, ‘Dakota’ was inspired by the brave Water Protecters and Citizens holding the line at the Dakota Pipe Line Protests. ‘Dakota’ was also written with red hot Psy Trance group UnderCover, and the result is an intensified experience that rounds out the inspiration and visual performance adventure” – Ben Watkins

“Dakota,” as with the others, layers elements of traditional music, in this case Indigenous chants with a techno beat, audio samples, and sci fi elements. This is definitely thinking dance music.

Next up, “Alien,” is a more glitchy track with an almost classic horror inspired sound interlaced with a rapid staccato beat and injections of electronic effect to round it out. This is old school trance rave, you can almost feel yourself surrounded by bouncing, gyrating flesh in a haze of smoke and an inescapable energy.

Track #5, “The Sky is Blue The Sky is Black,” opens with a woman speaking, “There is no place for fear, no place for panic, you need total control,” before dropping into a dark techno realm of deep synths and altered male vocals and an almost Twilight Zone-esque feel, while throbbing bass dominates throughout.

“Showtime” is up next, and opens fast with a high energy beat layered with echoing synths. While less stand out than “Return of the Pistolero” or “Our World,” “Showtime” could easily serve as the opening or closing track on any blockbuster sci fi film out today.

Number 8, “Voyager 304,” slows things down, relying more on samples and a more simplified beat and melody, all without losing its sci fi edge. We imagine that this is played as the Mutant Theatre is winding down, or maybe as a break from the intensity of the previous tracks. It has an almost dreamlike quality, layering such sample sounds as a pouring drink and wind chimes.

Finally, the album finishes with “The Tannhauser Gate,” an atmospheric, ambient closing, with tense synths and shots of glitchy electronics. Where “Voyager” slowed us down, “The Tannhauser Gate” releases us from the intensely controlled chaos of The Mutant Theatre, keeping us engaged while simultaneously allowing us to breath.

Juno Reactor’s The Mutant Theatre is truly unlike any other dance album out there, as it’s tied to a unique performance experience like none other. The album is diverse, every song being its own story but tied together, and it flows exactly as one would expect the live experience to, with high energy beats, soaring vocals, innovative music styling, and a modern but still solidly traditional production quality.  As a total experience, The Mutant Theatre is a 10/10.