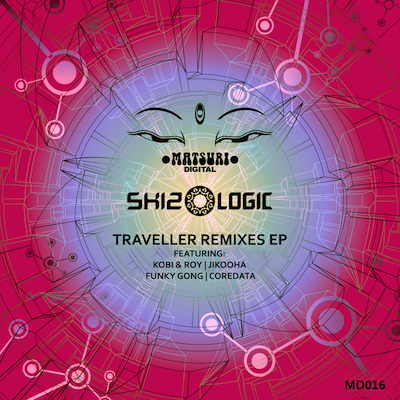 In 2015 Matsuri Digital released the Traveller EP by Israeli Nu-Goa artist Skizologic, who has in recent years played at the major European festivals and who ended 2017 with a hugely successful Japanese tour. Now the global psychedelic traveller

is back with Matsuri with a new release: the Traveller Remixes EP, featuring four brilliant versions by int ernational producers of that first release, each reflecting different dimensions of the track.

floor kick that builds tension throughout the track. Next is Coredata, a promising talent from the UK blasting with 90s acid vibes, whose take features a more driving rhythmic pulse, full-frequency percussive loops, and a frenetic 303 buildup that’s sure to raise the roof each time it’s dropped on the dance floor.Kobi Toledano of Loud joins forces with Roy Sason, founder of the Zion 604 label, for a mystical reworking that emphasizes the track’s harmonic elements with atmospheric effects, a

With Skizologic’s 2017 year-end performances fresh in the memory of Japanese audiences, Matsuri is thrilled to give international audiences a taste of what will be rocking dance floors worldwide in 2018!