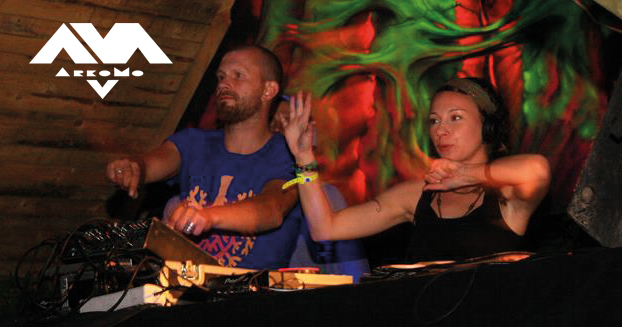 When Julia and Sven got to know and love each other in 2001, no one could have guessed that they would be on stage together from 2002 to today (live + DJ) and organize open airs.


In 2012 then, years of DJ activity lead to the ArKoMo project. At the beginning of her DJ-time she fell for the prog, she was euphorized by the Full On-wave, especially inspired by Skazi and the Chemical Crew, but also GMS, Cosma a.m.m.
Mosaico Records (Brazil) as a musical home base
In the many years as a DJ team they compiled various compilations, first for Planet B.E.N. Rec., where then DJ Pin A & R used to be manager. Who founded Mosaico Rec in 2011 and took the two along with him.
They were all for South American Psytrance anyway which had aroused the need to make a creative contribution. Through their Hamburg friends around Slackjoint (Amplidudes) doors were opened to their only DAW to date: Presonus / studio one. The boys helped a lot, introduced them to producing and a desire developed to bring together elements of Prog, Full On and Psytrance. Not too commercial, rather melancholic and hypnotic. They tried a lot, were deep into reading and in 2014 already, the first EP (Mosaico) was released. Further tracks and remixes followed, among others for Yellow Sunshine Explosion, Sun Department.
In the studio, the two proceeded diligently, where Julia’s preferences are melodies and 303 sounds and Sven likes to mess with the rhythm section. In how far the now-born child influences the relatively freestyle-like way of working at the Moog is unknown. But the live situation has become a new component: even though Julia specifically grabs laptop, effects and controller and Sven guarantees live mixing, the musical nudity in front of the audience is something new, exciting and very motivating.
A preference to create remixes recently came along. Shortly before Xmas, a special RMX will be released point-blank as a free download via Mosaico Rec.
The next EP’s release is early 2018, more EPs and RMX are already planned, their 8th compilation, a DO-VA “15 Years of Arkadius & Li’l Momo”, will be released too.
Until then, things are cooking, things like midi keyboard are being prepared for gigs, including samples of hip hop and films. Everything to further create the hypnotic Psy-sound and a feeling on the dance floor that sends you on a trip, without meaningless gossip pauses of failed rock stars.