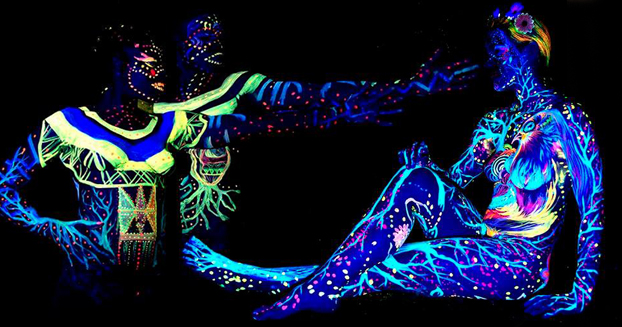 SumBodyArt wants to spread hope through bodypainting – also on YouTube

With her company and projects, the Asian-Australian bodypainting artist Wing Sum Diana Chan didn’t just enter the stages of international competitions. She also manages to touch the hearts of quite a few of her spectators. Bodypainting is her life. Travellers, who start the journey into her fascinating world of colours, will understand that quickly.

Her company is called SumBodyArt. Diana’s mission: “Spreading the message of love and hope through art.“ She shows in a creative way, that bodypainting can be more than a passion, but also a profession and way of life. Live-performances at festivals, exhibitions and clubs as well as private art healing sessions in SumBodyArt’s Studio are part of her work – as well as videos on her YouTube channel SumBodyArtLive. In her videos, you can see her in action, combining things, that she loves. Among other things, her videos also continue, what Diana has started with her first European Bodypainting exhibition in December 2016 in Hamburg/Germany.

The name of her first exhibition: SumBodyArt’s Home BodyPainting, a mixture of bodypainting photography, bodypainting dance videos and live bodypainting performances combining dance and acrobatics. Diana took her inspiration from the three places, where she was at home. Hong Kong, Australia and Germany. However, she puts the focus of the project on the meaning of home for all mankind at the end.

Diana was born in Hong Kong, grew up in Australia and meanwhile found a home in Hamburg in Germany, together with her daughter and inspiration Luna. Her projects for SumBodyArt continues around the world.

“Home is, when I am in the creative Zone and I can create what’s imaginable in my mind, and make it possible in reality and sharing that experience and creation with others“, she says. Home means for her creativity. She expresses herself with bodypainting, dancing, making music, modelling, cosplaying and surfing.

Her artist background is influenced by Diana’s experiences as a bodypainter, designer, model and dancer. Moreover, she has worked for ten years in graphic design, production and costume design. For eight years, she has been working as a professional bodypainter and model. In 2017, she was the sixth in the world at the World Bodypainting Festival in Austria in the category UV. In 2016, she was sixth in the world at the Dutch competition De Masquerade in the category Brush and Sponge. Moreover, she worked as a bodypainting model for some of the worlds best bodypainting artists and championship winners like Sahra Bull, Sophie Fauquet Perso (Popsie) and the King of UV Wolf Reicherter.

You can follow the way and development of SumBodyArt online: