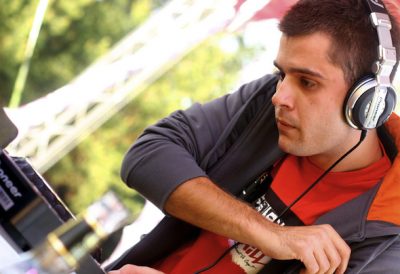 Alternative Control was formed in 2003, by Rastko Palikuca and Goran Toprek, both from Belgrade, Serbia.

They have been working together on this project untill 2011.Together they’ve made to release two albums “Alt+Ctrl” in 2006 and “Alternating Current” in 2011, they’ve played in every corner of this planet, from Brasil to Japan, from Mexico to Russia, visiting almost all major festivals like Full Moon, Ozora, Gathering, Aurora, Freedom festival, Indian Spirit, etc, collaborating with artists like Shanti, Sub6, Deedrah, Bamboo Forest, Protoculture, Animalis, Switch, Even11, releasing more then 40 single’s and left unerasable trace in psychedelic trance scene. Since 2011, Alternative Control has only member (Rastko Palikuca). He is currently working on AC’s third album “METANOIA” which is scheduled for the April 2015, we can expect as always unique tripping psychedelic trance style, with a lot of different grooves, sounds and melodies.Expect the unexpected.

Tell us a little about you and your work:
I’ve started making music in 2003, but before that when i was a little kid i was playing a piano for few years, i’ve graduated the University but never wanted to have an office job, i was going to the parties for quite some time from the year 2000, and in 2003 after visiting legendary Samothraki Dance festival i’ve decided to start making my own music, since that moment 12 years has passed, the rest is the history !

Currently what projects are you working on? And what future plans have you chalked out for yourself?:
I have finished recently a third Alternative Control’s album, named “Metanoia” its coming out for Fineplay Music – Japan in April. I’ve started my progressive project for the german label SpinTwist, its named Junction, in last year i have released 3 EP’s for the same label and now i am working on the debut album of this new project.

What influenced you to get into your field?:
My wonderful life !

As an artist, what role do you think you play in society?:
As an artist i do not care much about the role in society, i do my art to express myself, my emotions, my feelings, my visions, when i do it, i do not care much about the feedback cause i want to keep being an artist instead of an entertainer as much as possible, i would like to hear from the people that my music makes them feel more relaxed, more satisfied, more happy, but ppl do listen psychedelic trance for many reasons so i can only hope that my creations will do some good things for them and for their lifes.

You obviously love what you do…but what do you love the most about your work?:
In the studio, creating new sounds and new tricks, after work is done, traveling and visiting new places.

Creating on a regular basis can be a bloody tough job, so what motivates you to press yourself into the workstation every single day?:
Motivation comes from life itself, your family, loved ones, nature, space, stars, other artists, etc.

Everybody has to start somewhere, usually at the bottom of the ladder, either as the bus-boy or the shoe-shiner. What was the very first job you had?:
Booking agent in Serbia, i was bringing artists and helping an organization that was making parties in my country.

What is your second love? What’s the alternative career path you would have travelled if you were not on the one you are right now?:
Scientist…..physics, electromagnetic fields, electro-acoustics, Nikola Tesla stuff.

No man is an island’- they say, in this light, what quality do you admire the most in others?:
Passion and love towards the scene that i belong to and music that made my youth. Respect for everyone, from an artist, organizer, decoration guy, sound guy, security.

Sometimes life can be quite a – insert word that rhymes with witch. Which phase was the hardest/scariest in your life?:
When my father passed away in 1999.

Any embarrassing moments? Yes, you’d hate to disclose your secrets but we’d love to hear.:
Not an exactly embarrassing, but definitely i was most scared and my knees were shaking when i played first time in Japan, on Gathering festival in front of 6000 people.

Name a few of your all time favourite tracks. (From other artists if you are producer).:
Long list would it have to be..but let’s try, from Astral Projection, Space Cat, Infected Muhsroom’s first stuff, through Astrix’s first album, Zorba, birth of Spun records, HOMmega, Protoculture, Shanti, Sub6, Deedrah,i think it would be for sure hundred songs that i consider as my all time favourite.

There’s a book on the shelf. It’s your autobiography. What does the title say?:
Serbian vision of psychedelic trance.

Flash-forward in time. You are now really old. What would you tell your children/loved ones?:
Do only what you love the most !

Into the time machine again. What do you miss about being a kid?:
Innocent mind and energy !

Excessive chopping dulls the axe. Time-outs are a must. What do you do when you take time off from creating? Got any hobbies?:
If i want to really take a rest, then its for sure walks in the nature, or going to the river, but if the weather is bad then i stay at home and read the book or watch some soccer match.

With all the X-men and heroes running around. Us mortals would like some powers too. What one superpower would you choose?:
To be able to receive and transform energy from the spheres/air/ethar and use them in practical life. It would stop all the wars.

The genie comes out of the lamp and grants you one wish that will change the world. What would you wish for?:
Peace and love everywhere !

Got any theories on how the universe blossomed into existence or on the rationale of life? Are we in the matrix? Did god knit a hologram?:
We are 100% in the matrix – matrica – program. The question is what is our role/job on this planet, in this system, we should all try to find that meaning inside ourselves. Everyone has its own role and purpose.

In an era where most people bear a close resemblance to sandpaper, it’s easy to snap. What are your dislikes/pet peeves/frustrations?:
Propaganda, lies, unjustice.

How do you connect to the spiritual side of yourself?:
Once spiritual side has opened inside of my mind connecting to it was an easy part. Opening it was a quite heavy process.

Are you pro-weed culture? Why do you think the majority of the population goes against the green?:
i am 100% PRO-weed. Majority is against because of heavy propaganda that is still going on.

At the end of the ride, everyone’s looking for some form of success (tangible or not), what does success mean to you?:
Stay healthy, happy and filled with love, thats all you need to live.