Aye or Na-aye? Mushrooms are painting the Medical Town Red 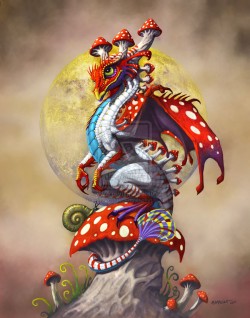 There is a popular saying that goes like this, “If the Shroom is red and has a star in its eye, Follow it!” But truth aside, it’s a common assumption that psychedelics function as tools for mind-expansion by means of accelerating brain activity, thus the discovery that psilocybin mushrooms actually lowers brain-activity in areas containing the densest amount of neural networks, came as quite a shock to researchers. Professor David Nutt, the guy with the oh-so-perfect surname for such a study, aka the guy in charge said: “These hubs constrain our experience of the world and keep it orderly. We now know that deactivating these regions leads to a state in which the world is experienced as strange.”

It was discovered that the (lucky) participants of the study who were given single dose of psilocybin (not-so-lucky) had a decrease in depression even up-to six months after the dose. So the science-guys admit that the drug improves a person’s sense of emotional well-being…hate to say I told you so? Psilocybin seems to put a filter on the noise or the static in the brain, thereby making the user, calmer and vaguely monkish.

But the good news doesn’t end there, more studies suggest that psilocybin mushrooms could puts its fingers around the addiction that causes smoking and strangles the F-out of it. The participants of this study were those individuals who smoked only 20 cigarettes a day, for 30 years…and these guys had also quit smoking more than six times in their lives. It was found that even after six months 80% of the participants abstained from smoking…now how true this part is…that can’t be told…maybe the participants were given some sort of cues…Any opinions?