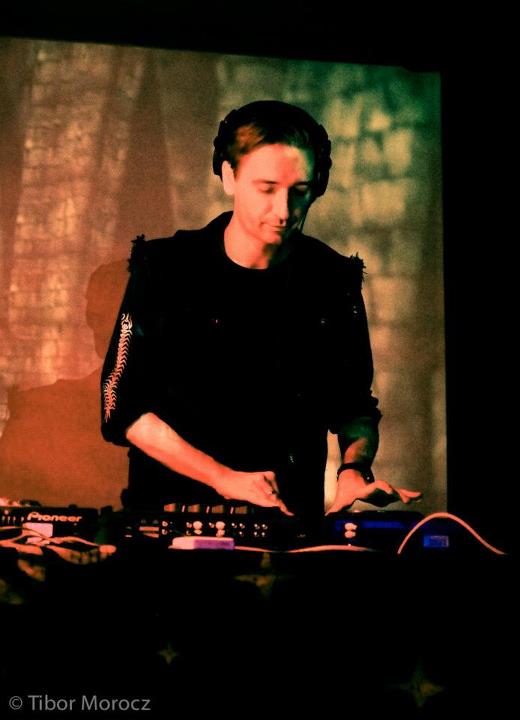 He is a 2nd generation Psytrance Dj in the hungarian lands, his electronic musical interests going back to the middle of 90’s when he started to collecting original vinyl releases, famous records like: TIP, koyote, Twisted, Eticanet, Krembo, Spirit Zone, etc…
His adventures started soon after this period, leading him to numerous festival and bigger venues across the European fields, perfoming at a lot of mid-sized psytrance events.
Nowdays he is actively planning the future with his partners from all around the globe. He has also upgraded his family to another level with the arrival of a new life. His cooperation with greeks and especially MARIO darkshire has already resulted in a release (FTO001) and FTO002 is soon to follow, while he’s also working on a central Europe based agency called the Future tribe Bookings.

Tell us a little about you and your work:
I am 35 years old now, just become a young fater, I have a small daughter called Aurora, also i have a classical family with a lot of components in it. Mosty I play at local Hungarian parites to friends. I help in Bookings foreign artist to our land. I made a release FTO001 A year ago at Saikosound, which was of of their last releses in they carrier sadly i can say, but the people liked it for sure. I have made this with my friend Mario(kokobloko) from athens who work also in otheres trance section of the dark/forest/psycore as well. We have had an idea to do a compilation of international artist from U.K., Portugal, Holland, Hungary and for sure Greece from Trance music, than after a half year of work it happend, we also produced a label party at 2012 November on a fame place Almássy Hall (now it is closed down), with a hard conditions. For sure some with some clash/cross event onto us. There is everywhere in the world people who dont respect othere people work or has a green eye on other people work or life goals, but this is the life what we can do. It can happens..

Currently what projects are you working on? And what future plans have you chalked out for yourself?:
At the last 2-3 years i was out of the sceen because of my daughter, at this period of the kids growing the parents should be with the kid almost non stop so it took me a lot of time and energy to take care. At the last few month I get back to our trance sceen, especially it was a big succes to play at our biggets festival called OZORA 2014. Here I want to say thank you to all the organisers, and especially to Dj Wegha who helped me to get back to this wonderful atmosphere, to our roots. Paralell I try to Import raw material to Europe market from the far east (Like India.etc.) Its a bit hard cause at this market now a lot of component and hundreds of companies try to grab their long therm customers, but it is very interesting to be a part fo this.

What influenced you to get into your field?:
I want to say thank you to my family also my uncle brother from Kiev who gave me this first tapes of eat static and trancore, to all my friends who motivated me in the first years (Ádám & Puli&Tswest) at the end of tha 90’th. Especially the first promoters: Halásztelek, Kenguru & Psybaba, Pintér Gábor & Bernáthy Sándor, Hanuska Gábor, Oleg Peti & Virág The garanacsi-tó crew, the Freee magazin, the old times Sziget festival organisers, Dj Ramses & Manna from Holland (and to all Holland freax who i know), The Boom festival, Crystal Matrix records, The Parasense Guys, the gusy i know i St. Petersburg and in Russia, The Czech/Slovakian Organiser who i Know. And there is a many people more who helped me. To Winne-one, Kugler. Nowdays the y-prod also a big help.

As an artist, what role do you think you play in society?:
Well I our society the djs are mostly dictate the music to the youngsters, we saying them like poems or like we drow them a picture. This is like a Modern Communication between the ppl. For sure some people doesn’t understand this music cause they only hear the bass, they can’t separate the sounds and the sound levels, but we don’t play our music for them,we play for thosse this who can dance in peace and in silence. Mosty i dont like artist who hype themselves in front of the people, with this big face etc. You know this, they think they are like some kind of gangsters, using this classical words like: “dude” “killer” “brother” etc. you know this… Look we are not in a Gangster film Sirs.. If you are in this there is some kind of problem in their life.

You obviously love what you do…but what do you love the most about your work?:
I like the faces how they entertain themselves while they dance, and how they throw out ther heads while I play, this is unforgettable moments. It is a very good energy between us. Usually when i reach home after a party like this i feel this vibration for days. This is the most important the vibe and the vibrations, which is coming from acient times like when the cavemans was dancing, it is the same just in a modern way. Keep this ritual dancing please.

Creating on a regular basis can be a bloody tough job, so what motivates you to press yourself into the workstation every single day?:
To get a new music, get interest more to get more new music, it is like to get food from the supermarket, total the same. It is again about the energy. get new connections and new friends.

Everybody has to start somewhere, usually at the bottom of the ladder, either as the bus-boy or the shoe-shiner. What was the very first job you had?:
My first musical job was at the end of the primary school, we had to play on a school event at the Csepel island, it was a fresher’s ball. We was plaing from a tape and a Compact disk player. The Compact disc was just get into Hungary, it was a very special thing at that time. I never forget this event. there wa ssome actions in a school radio, we recorded tapes from the redio with very precise cutting in that time, I was goint to the DMC to see the first ones here in Hungary. Than one of my friend Dj Tswest (gabba dj) asked me to warm up his events in the Total car (újpest), we have done it at 1995.

At the end of the ride, everyone’s looking for some form of success (tangible or not), what does success mean to you?:
Look the most important is to point your goals. Always search for new goals. If you get thru your goal and got it, search for a new one, life is colorfull, many wonderfull things in it! Don’t rule the wolrd, rule your own life first, and make a nice sorround nearby you. If your goal doesn’t happend dont worry, there will be some new come, and never give up! never! In every persons life there are bad periods, left it, throw away like a trash into the garbage, belive me it will works. You can also throw out bad fellings from your brain, like the process mentioned above. And try to stay calm, if you stress to much you will get old very fast, and this is not about the material state, money is not the most important thing in the life, don’t follow the super hyper multimillionaire method of life, they also suffer belive me, this is not to something to live for, it is just a picture what the media draw you, dont belive to this. Dont want to be a superstar! Everybody born equal. Belive in yourself!