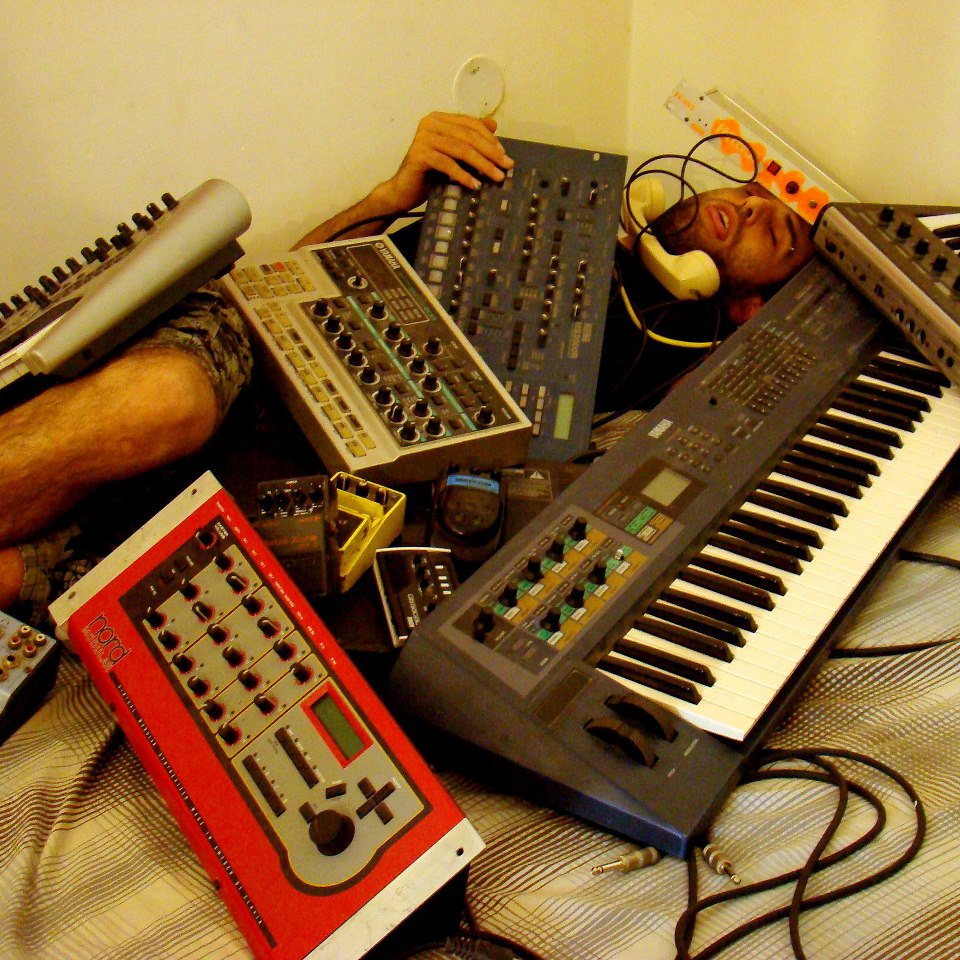 Yaron Faxi Nadu Eshkar has been producing music since 2002. Through the years Yaron has ventured into various forms of electronic music and has spent a few years away from trance producing idm and dark ambient experimental soundscapes. In 2008 he took a three years break from production and at that time hosted a trance radio show and some parties, re-defining his tastes and love for trance and psychedelic music. Faxi Nadu music basically started as silly nintendoish noodles and went through and still is going through constant change, through the darkness and the light, with each album presenting a totally different story and style while maintaing that which is uniquely Faxi Nadu.In 2011 Yaron met Oss who became both his music partner and life partner and now the Faxi Nadu project is a collaboration between them. Oss has progressivley taken part since The Last Kick of Your Life album and today she is a full partner in crime 🙂 In 2013 Nuno Muacho (Nomad Moon from Portugal), Leander Winkler (Killik from Germany) and Faxi Nadu met online and started to talk about music and from that the Ocean Star Empire project was born. Leander left the group after the debut album, but Ocean Star Empire was joined by Kyle Ramos (Bacchanalian Bass from the USA),and six tracks have already been produced for the next album. Oss and Faxi are also currently working on a live act where they perform a REAL live show with synths and controllers and jam Faxi Nadu and OSE music.

Tell us a little about you and your work:
Faxi Nadu is through the last few years a collaboration between me (Yaron) and my wife Oss. We tell stories arranged in a form people call trance. We worry less about sounding a certain way or triggering certain ques for people on the dancefloor. Usually we work out some ideas together. I track and arrange most of the stuff. One thing Oss likes tracking are perc samples. I work most of the sound design and then we go through recording automations and channels while I handle the DAW and Oss controls the synths and does the knob tweaking and automations. Then we might arrange it a bit together, and I will sit and polish it to completion. During our live shows, her job is mostly the same as in the studio – controlling synths and tweaks, while my job is to trigger channels and mangle drums and loops with fx. Things aren’t rigid though, we flow.

Currently what projects are you working on? And what future plans have you chalked out for yourself?:
As you read this our album “The Dangling Thread” is about to be or already released. The idea of the album was to elaborate on our hypnotic-experimental-geometric-psychedelic-goa concept we have been messing with and to provide a full storied experience. Simplicity and detail, experimentation amid a classical core to form a unique blend of past and future – that spot on the horizon where Aristotle meets Plato for a chat. The sound design of the album aims to sound both proffesional yet raw and “real” with a moody and distinct character and tone. The stories are told as patiently as we can possibly tell them striving for drama and a theatrical feel. Channels were recorded in very long live takes with extensive automations and an interactive vibe. The core groove is simple and very Doric while the synths and sounds are Corinthian and all over the place. Through this contrast we define our sound. We are also working on tracks for our Ocean Star Empire project with our partners, and are on the way to the next OSE album.

What influenced you to get into your field?:
A night with Fruity Loops 3.0 and never looking back,

As an artist, what role do you think you play in society?:
It depends for who. Entertainer is the obvious, but I would also like to think we can provoke thought, not even regarding a specific subject, but an inner dialog for the listener. We want to take you places, to tell you stories that are open to your own interpretation.

You obviously love what you do…but what do you love the most about your work?:
I am very proud of all the recent developments in terms of the way we tell our stories and the depth of character.

Creating on a regular basis can be a bloody tough job, so what motivates you to press yourself into the workstation every single day?:
If it wasn’t love, there would be no other reason to do it. It is just who I am.

Everybody has to start somewhere, usually at the bottom of the ladder, either as the bus-boy or the shoe-shiner. What was the very first job you had?:
Flipping burgers 😉

What is your second love? What’s the alternative career path you would have travelled if you were not on the one you are right now?:
Probably history / anthropology in some form or fashion. Maybe archeology,

No man is an island’- they say, in this light, what quality do you admire the most in others?:
We are honest people here.

Sometimes life can be quite a – insert word that rhymes with witch. Which phase was the hardest/scariest in your life?:
I guess there would be two of those. None are really major compared to what some people go through, but for me a relationship breakup some years ago led to a bit of a loss of identity and wandering, and I would say the second phase i going on right now, I am having a really hard time with the hate directed towards my country by some in the scene, it is really knocking me out of balance.

Everybody’s got favourites…so what’s your favourite work/piece among everything that you’ve designed/produced/dj-ed/created? (Link us up!):
The current fav is from our new album and not online yet, but here is something that is also from that album and is already up. This track tells the story of the city of Gamla in its final days and hours. It was an ancient jewish city destroyed by the Romans and left to decay into history. Today the ruins stand atop a cliff on a hill shaped like the back of a camel, with magnificant eagles nesting in the area, and only the birds remain to tell the story… a heartbreaking tragedy of events long forgotten brought to life. In this track Spinney Lainey played the flute parts. We have sent her a skeleton of the arrangment and told her about the story and she improvised the flute recordings and returned them to us to play with. Other than the actual acoustic flute, there are a few Roland JV880 electronic-acoustic sounds with Scope Modular doing a lot of the crazy psychedelic twirls. https://soundcloud.com/faxinadu/faxi-nadu-the-dangling-thread-06-the-fall-of-gamla-feat-spinney-lainey
Name a few of your all time favourite tracks. (From other artists if you are producer).:
The Muses Rapt – Spiritual Healing Astral Projection – Dancing Galaxy

When have you been most satisfied in your life? Care to share one of your happiest memories?:
The trip to Berlin last year with my partner and wife Oss. Ten perfect days of togetherness, exploration, education and connection.

Habits die hard. Which one word always creeps in your speech?:
Lol i rather not say, who knows who might get offended 🙂

There’s a book on the shelf. It’s your autobiography. What does the title say?:
The Dangling Thread

Flash-forward in time. You are now really old. What would you tell your children/loved ones?:
That I did my best

Into the time machine again. What do you miss about being a kid?:
Everything! 🙂

Excessive chopping dulls the axe. Time-outs are a must. What do you do when you take time off from creating? Got any hobbies?:
Really into American football though I feel the game is getting ruined in the last few years, I seill follow and watch though. Love oldschool gaming, spent more time on Dr. Mario than any sane or otherwise person schould.

What’s the last movie/T.V show you saw or book/magazine you read?:
The show Fargo was kinda awesome, though I still like the movie more. I’m a geek, the only books I am into these days are encyclopedias and history books.

With all the X-men and heroes running around. Us mortals would like some powers too. What one superpower would you choose?:
I’ll take time travel please!

The genie comes out of the lamp and grants you one wish that will change the world. What would you wish for?:
For everyone to stfu 😉

Got any theories on how the universe blossomed into existence or on the rationale of life? Are we in the matrix? Did god knit a hologram?:
My theory is that there is no theory. Big Bank and Darwin. God is your life experience, you make your own god, and he lives and dies within you.

In an era where most people bear a close resemblance to sandpaper, it’s easy to snap. What are your dislikes/pet peeves/frustrations?:
Religion turns me off

How do you connect to the spiritual side of yourself?:
Producing music is the direct link

Creativity and psychedelics work together. Do you agree? Why/Why not?:
Well yeah kidad, depends for who. To each is own, but I’m not into hard drugs and in fact they mostly turn me off. But yeah we’ve all been young.

Any work/pieces that were inspired by entheogens?:
Do you consider weed an antheogen? If you do then…. 😉

At the end of the ride, everyone’s looking for some form of success (tangible or not), what does success mean to you?:
Success is when one of our own tracks gives us goosebumbps even years after making it.