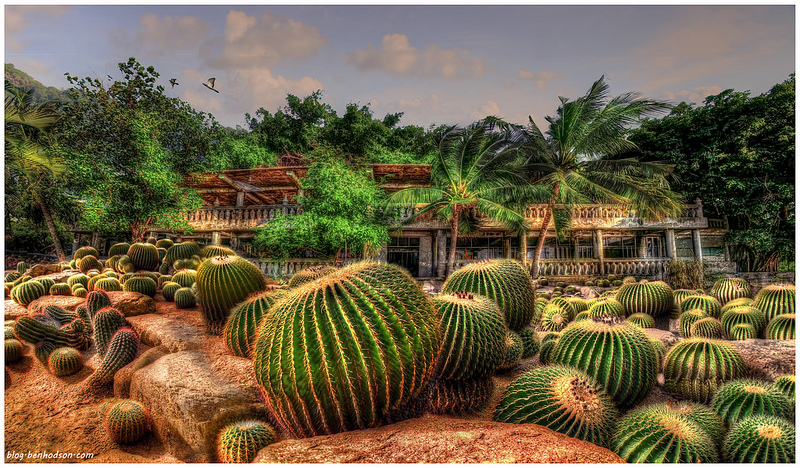 So, I sacrificed four of my eight Peyote cactus for a trip on Friday night. I took 4 x five inch Peyote buttons washed down with a large sweet black coffee over a period of a few hours. Included in the coffee was a table spoon of ground Nutmeg, sourced from McDonalds coffee bar (Nutmeg containing the precursor to MDMA, and said to help with the trip). Being that I don’t drink alcohol or smoke pot made the adventure clean and uninterrupted. Unlike many of the LSD and mushroom trips of my youth.

There seems to be a misconception that Peyote (Mescaline), Mushrooms (Psilocybin) and LSD produce a very similar type of trip, or intoxication. This conclusion couldn’t be further from the truth: I took the native American Indian approach to Payote, and simply consumed as much as I could over a few hours, in its raw form, directly from the plant. It seemed relatively slow to take hold, at around two hours after consuming plant number one. The first feelings I encountered were of heaviness of limbs, swollen mouth, a numbness, accompanied by a mild metallic taste. Symptoms that I would describe as closely related to a Mushroom intoxication, with a similar feeling of nausea. Nevertheless, the sickness was quite manageable, with no need to vomit.

About three hours in, I began to become overwhelmed by a feeling of euphoria, reminiscent of the drug MDMA – without its rushing hot flushes. To be honest, there was no great rushing sensation throughout the trip, other that some minor hot flushes that came up initially in hour two. More-so an overwhelming clarity and euphoria began to take hold. Those who have had an LSD, or mushroom experience – at about hour three – would be familiar with the term “tripping balls” or high volume visual geometric distortions. Peyote is much much more subtle. There’s a surprising absence of colorful visuals earlier on. However, there is a tremendous feeling of distorted spatial awareness that takes hold. A feeling that one might be looking through a wide-angle camera lens, focusing on details like, shadows, shapes, reflections and light; their relationship to other objects in and out of context becomes distorted yet strangely interesting. Different locations also seem to shift your dimensional perception; one room has a different feeling and/or aesthetic to that of a another. There’s also a sense of shrinking and expanding perception – very Alice in Wonderland.

At hour 4 – 5: Limbs and muscle use becomes near impossible, with one enveloped in a tremendous feeling of euphoria. Visually, a mist-like haze clouds your already distorted view of the world, spatial distortion becomes most prominent, giving rise to a dream-like state. The mind now wonders to observational topics, such as, surface textures, spatial awareness, light and their disconnection from general reality. Still much absent, the over emphasized geometrical patterns found on LSD for instance. Bright lights become painful to the eyes, even the most dim and distant. One is now fully immersed in the experience,

At hour 5 – 6: Walking had become very difficult. The trip would begin to peek and lull in intensity at 10-15min intervals, over a period of one hour. At one peek my whole body seemed to be buzzing – which should have been a moment for concern. Instead, life, death and time seemed to be most irreverent given my state of euphoria. Euphoria and spatial distortion are far more a part of the Peyote dynamic than those of visual hallucinations – there are no nasty surprises here. I’ve encountered hell and high water on mushrooms and LSD, but this was far from that type of experience. Time passed peacefully without confrontation and feelings of confusion. I would like to note there’s a strange sensation of being in a void, a feeling of distance, but this is not at all uncomfortable.

At hour 6 – 7: The light mist-like haze seems to over shadow everything, Although only visible in darkness, the haze is comprised of a multitude of colors and patterns, that seem to dance under ones control. A state similarly produced by other hallucinogens. Terrence Mckenna refers to it as, “Vegetable Television.” However, in the case of Peyote the visualizations were not blasted at you like a rock concert. More they would suggest themselves, and reward you by concentration; projecting the intent of an idea, one might stretch and mold images into form. Though still weak in appearance, it was a source of entertainment and wonder for an hour or so.

Hour 7 – 8: With my eyes closed, enveloped in a feeling of high euphoria, tuned into Peyote TV and listening to, “Carbon Based Life Forms – Interloper.” The music acted as a good medium. But, there was no feeling that music was needed, as the intense euphoria and mild hallucinations were sufficient in themselves. I would assume Indian Shaman refer to this stage of the trip as the point at which they make contact with their ancestors. I was able to meditate on questions and provoke answers much more freely at this time – more than any other. Nevertheless, the only thing I could get back to was that life is full of background noise, and one should keep true to forming ones own path out of it. There was no negativity to be found in this trip, just food for the soul. It came as a surprise, as both mushrooms and LSD generally take you on a wild emotional ride, with my only other cactus trip being a weaker dose of Trichocereus peruvianus to compare.

It was at least an insightful affirmation of past ideas. Not a deliverance from the Gods, ancestors or entity(s), so described of in similar DMT experiences. Sleep by this point was much needed, but hard to find; intense yawning. I also felt very hungry and made light work of a Snickers bar and bag of crisps before managing to fall to sleep at six o’clock in the early hours. I woke-up at eleven with a residual feeling of euphoria which lasted into the latter part of the weekend, full of energy and clarity. It seemed that there was little come-down to be had. Due, in part, to the lack of rushing one associates with MDMA and Ecstasy. This tends to manifest as a negative down ward spiral as one withdrawals. As they say, there are no rough edges with Peyote. Alexander “Sasha” Shulgin active level of +3 reached.