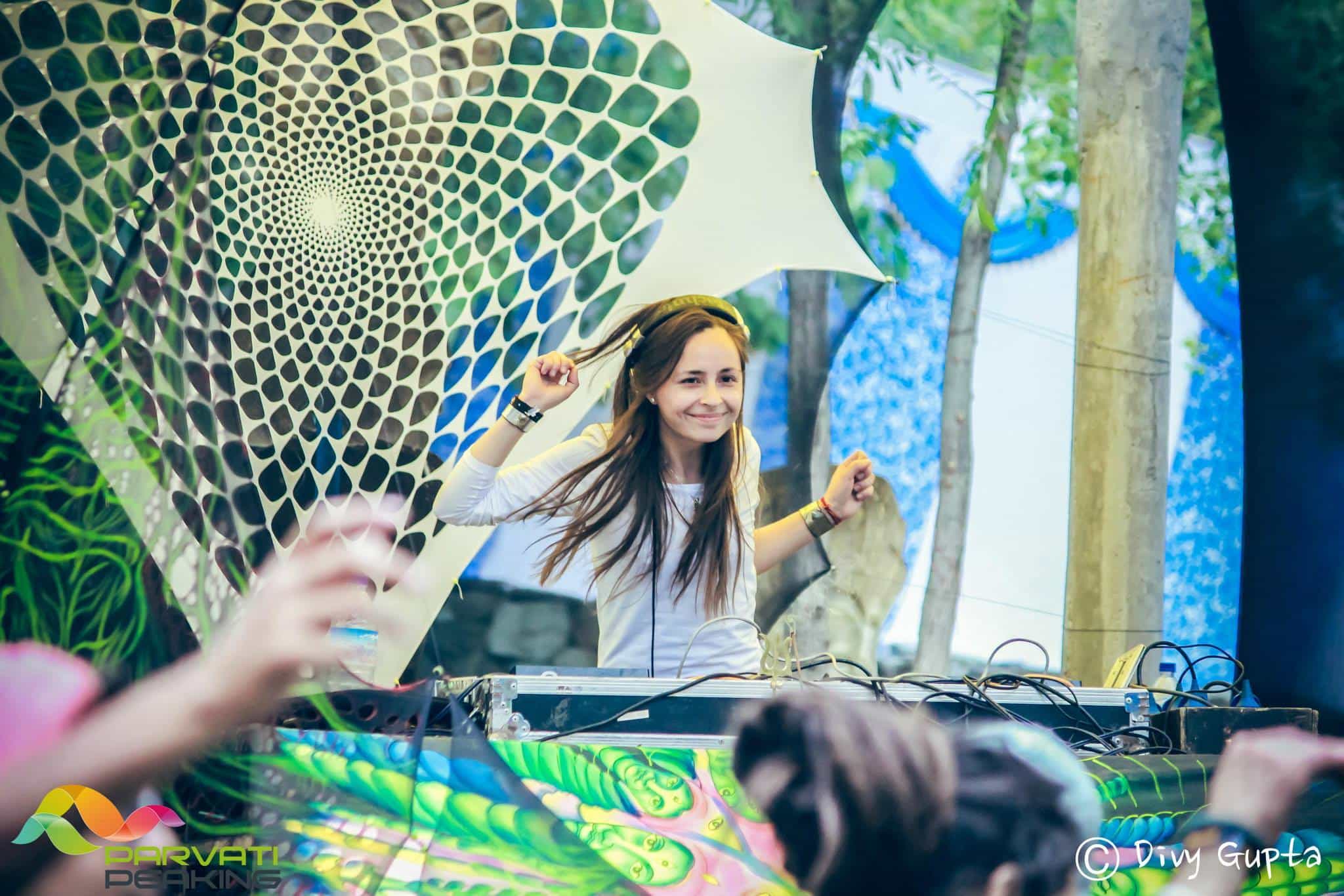 with her dark progressive DJ sets, Anna expresses her musical experiments, producing chill out / ambient music with her Dusha project.

She started as a vocalist in a rock band, at the age 17. After shifting to psytrance scene, actively participates in events organisation, and starts to DJ. in 2008 moves to Germany, a year after to Amsterdam, The Netherlands. Keeps practicing DJing, playing at local european gigs and going abroad to bigger events and festivals, such as Parvati Peaking, Kundalini Shakti (India), touring in Mexico, Japan. Anna learns music production actively since 2000, finishing SAE institute Electronic music production course and constantly producing. As Tulpa she produces psytrance music, and Dusha project is dedicated to subliminal worlds.

Tell us a little about you and your work:
Hello 🙂 I am a girl that makes a lot of harmonic noise.

Currently what projects are you working on? And what future plans have you chalked out for yourself?:
I am both: Tulpa – DJing; Dusha – producing chill out music. Future plan: second release of Dusha Project – Dusha II in january.

What influenced you to get into your field?:
Boredom.

As an artist, what role do you think you play in society?:
Universal language that is sound, needs mediums to express it. That’s what we are.

You obviously love what you do…but what do you love the most about your work?:
Happy faces. Opened minds and hearts. Trance state that we fall into and share this moments of bliss.

Creating on a regular basis can be a bloody tough job, so what motivates you to press yourself into the workstation every single day?:
Impermanence of things.

Everybody has to start somewhere, usually at the bottom of the ladder, either as the bus-boy or the shoe-shiner. What was the very first job you had?:
administrator for advertisement company.

What is your second love? What’s the alternative career path you would have travelled if you were not on the one you are right now?:
Worlds creator for VR and game industry.

No man is an island’- they say, in this light, what quality do you admire the most in others?:
easy going nature.

Sometimes life can be quite a – insert word that rhymes with witch. Which phase was the hardest/scariest in your life?:
between age 13 – 21.

Any embarrassing moments? Yes, you’d hate to disclose your secrets but we’d love to hear.:
writing this interview :))

Name a few of your all time favourite tracks. (From other artists if you are producer).:
Interferenz – Aftertrip. David Laake – Kick is Good.

When have you been most satisfied in your life? Care to share one of your happiest memories?:
Sleeping near by my son. Morning coffee. Tour to South America. Playing in Toluca and going to Pollo Feliz with Billy, Jorge and Blazing Noise. Going deep to the jungle of Guatemala, playing music on top of the Tigre pyramid at El Mirador. Swimming in Hotsprings in Himalayan Manikaran. Playing there my dark prog DJ set, and dancing with people. Opening Solstice festival in 2015. Visiting hot springs in Kochi Japan. Trying out yukata in Tokyo. Playing synths there as well. Many more.

Habits die hard. Which one word always creeps in your speech?:
“Obviously’ and “Blya”.

Knock, knock, we want to hear a good joke.:
Nope.

There’s a book on the shelf. It’s your autobiography. What does the title say?:
The Sun, The Moon and The Stars.

Flash-forward in time. You are now really old. What would you tell your children/loved ones?:
I’m never old.

Into the time machine again. What do you miss about being a kid?:
My brothers.

Excessive chopping dulls the axe. Time-outs are a must. What do you do when you take time off from creating? Got any hobbies?:
I sleep.

What’s the last movie/T.V show you saw or book/magazine you read?:
Game of Thrones, duh.

Name your all time favourite movie/show/book.:
12 chairs by Ilf and Petroff.

With all the X-men and heroes running around. Us mortals would like some powers too. What one superpower would you choose?:
Make a snow at Christmas.

The genie comes out of the lamp and grants you one wish that will change the world. What would you wish for?:
Buchla Skylab and Easel.

Got any theories on how the universe blossomed into existence or on the rationale of life? Are we in the matrix? Did god knit a hologram?:
He was just bored.

In an era where most people bear a close resemblance to sandpaper, it’s easy to snap. What are your dislikes/pet peeves/frustrations?:
Some people.

How do you connect to the spiritual side of yourself?:
I dance.

Creativity and psychedelics work together. Do you agree? Why/Why not?:
Agree. They turn us into dolphins.

Are you pro-weed culture? Why do you think the majority of the population goes against the green?:
i don’t smoke. Anymore.

Any ideas to rectify this mindset?:
Don’t do drugs, m’okey.

At the end of the ride, everyone’s looking for some form of success (tangible or not), what does success mean to you?:
harmony in every aspect of life.