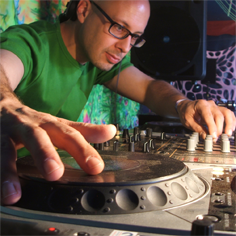 
Dense is deejaying since the age of 20 in 1993. After learning to play synthesizer from the age of 14, he started own music productions in 1995. Dense refined his striking style of performing progressive chillout music since 2008 when he started „chillgressive tunes“. Beside these, his virtual homebase is Chromanova.fm, the leading web radio station for modern chillout sounds, supported by most of the important psychill lables. You can enjoy Dense exclusively on Sundays with his weekly four hour radio show „Chill On!” since 2010.
In the past years he released two albums together with GMO via Altar Records, a GMO chillout remixes album and his solo album „Exhale“. Denses recent album „New Speak“ is out now on Cosmicleaf Records. The next one is almost finished and scheduled for spring.

Tell us a little about you and your work:
Currently there are three sides to look at: working as musician, as DJ and managing Chromanova.fm web radio. Main part is music production with focus on sounds between 80 and 120 bpm, mainly danceable progressive chillout sounds. DJing got a bit less in the last years due to live performances. At Chromanova.fm I‘m predominantly responsible for the music selection, means collecting mixes from our supporting DJs and always looking for interesting new. In addition, I prepare all the album and EP mixes running on air and broadcast exclusive mixes. Every Sunday afternoon I stream the weekly „Chill On!“ transmission. As long it‘s possible you get the freshest releases in the first hour followed by an exclusive DJ mix, sometimes thematically specials. Most of the sounds running in the daily program you get in my show first.

Currently what projects are you working on? And what future plans have you chalked out for yourself?:
These days, I‘m finishing my next solo album, what‘s scheduled for March 2015 and will be quite a bit more chilling than „New Speak“, out since September 2014 via Cosmicleaf Records. Of course it will contain some danceable progressive chillout. Actually, I did some remixes like for Tenturas „Theme Patcher“, released in May, and another one for Maluns „Afterburner“ is coming in October. Necton and I started a new project and we hope to surprise you in 2015. Working for Chromanova.fm takes some time and by luck we get support by most of the leading chillout labels. Winter days will be used to upgrade our program and bring more exclusivity on air like already started e.g. by the ten-part series „Fairytales“ with focus on slower tunes.

What influenced you to get into your field?:
Totally bored of usual mainfloor tracks end of the 00-years, searching for sounds to create something new. Probably by not getting younger, the direction was to get slower. First DJing, followed soon by producing own sounds again after a producing break of 8 years. Nice to hear I‘ve influenced some artists to produce that kind of sound I prefer.
Everybody has to start somewhere, usually at the bottom of the ladder, either as the bus-boy or the shoe-shiner. What was the very first job you had?:
Maybe the weekly job as a paper delivery boy after school was the base for later activities for several music magazines. Therefor the start was 1993 when writing articles for Frontpage Magazin as an agent for the Ruhr area part. Here the name „Dense“ was born, adopted later when started DJing.

What is your second love? What’s the alternative career path you would have travelled if you were not on the one you are right now?:
Nature photographer.

Everybody’s got favourites…so what’s your favourite work/piece among everything that you’ve designed/produced/dj-ed/created? (Link us up!):
As a producer, every next track is the favorite one. Changes too many times.

Name a few of your all time favourite tracks. (From other artists if you are producer).:
M.A.R.R.S – Pump Up The Volume Icon – Desire (Tronic Mix) Hardfloor – Acperience 1 Brainchild – Symmetry Massive Attack – Unfinished Sympathy Can I add 20 more? And with no special tracks, most inspiring artists were of course Yello, J.-M. Jarre, Koto, Kevin Saunderson, Josh Wink and somehow this GMO man.

Knock, knock, we want to hear a good joke.:
A festival promoter requests an artist to play. They are talking about the fee and then the promoter says „… and additionally you‘ll get in there for free!“. Oh sorry, that wasn‘t a joke, still happens these days … maybe a running joke told from promoter generation to generation?!

There’s a book on the shelf. It’s your autobiography. What does the title say?:
Listen to CD* inside. (I tell by music. *may be replaced by „any other digital medium“ in future)

At the end of the ride, everyone’s looking for some form of success (tangible or not), what does success mean to you?:
Seeing goose bumps in the audience when playing own productions, can‘t be better.