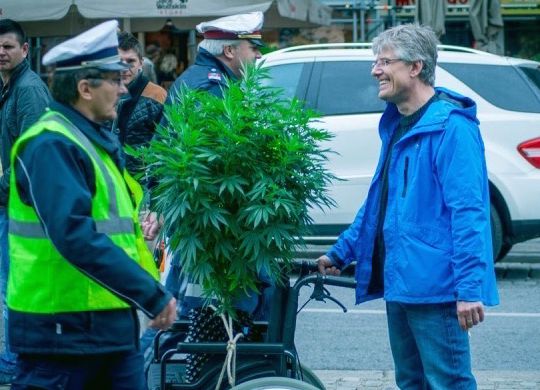 Arriving at the restaurant in Burggarten, Toni Straka, speed typing on his laptop, a phone jammed between shoulder and ear,
is easy to spot.

We can‘t help picking up a sad snippet of his conversation: „The government enacts drug law reform that is not a reform but will declare one million hemp friends as cannabis addicts by decree.“ Obviously Toni is very indignant. This new law is a punch in the face of 33,000 Austrians who have signed Austria‘s first parliamentary citizens initiative that demands full cannabis legalization.Three years ago the former financial journalist was arrested by the police, accused of masterminding a multi-ton cannabis smuggling operation. Eventually he got a suspended sentence for the non-commercial import of 35 kilos high grade medical cannabis. Realizing his name was now stored in Interpol databases next to terrorists and mafia hitmen, he helped develop the Vienna „Hanfwandertag“ into Europe‘s biggest annual political protest for legalization.

Moreover in 2014 he founded the Hanf-Institut (Hemp Institute) and is determined to end more than five decades of criminal
persecution of cannabis users in Austria. To Toni the bill is a prime example that politicians are out of touch with their constituencies. „All polls of the last two years show solid majorities between 65 and 85 percent for full legalization and support for the decriminalization of medical cannabis users consistently ranges between 90 and 99 percent.

In cooperation with ArGe Canna, a non-profit organization lobbying for cannabis patients rights, the Hanf-Institute keeps hemp legalization on the national agenda with a new initiative, asking for full decriminalization of patients who grow their own weed, so far signed by several thousand. Which is step one of the Hanf-Institut‘s three step strategy for full legalization.

“First we want to decriminalize possession and push through the permission for patients to home-grow their medicine; secondly, the legalization of non-profit Cannabis Social Clubs; thirdly, the participation of experts with practical cannabis experience in a true reform of Austrian drug laws based on evidence.”

The current negative attitude in political circles may change anytime soon, he estimates, based on the fact that Austria‘s
budgetary situation is deteriorating rapidly. “Our calculations show that legalization can contribute around 500 million Euros to Austria‘s budget.” In other words: “On a rational basis Austria will not be able to afford anything but legalization.”