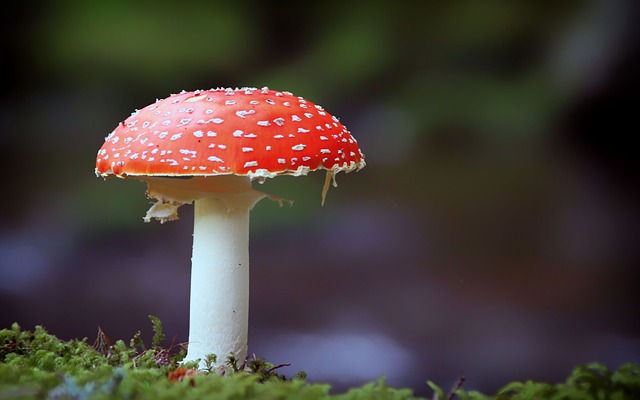 This is an extract taken from, “Psilocybin: The Magic Mushroom Growers Guide,” by O. T. Oss and O. N. Oeric, and there’s a foreword by Terence McKenna. It proposes that the mushroom is more than what it appears to be, an alien life form to be precise. Written from the first person narrative, wherein the mushroom is the protagonist, this piece offers a very interesting alternative view of the fungi.  McKenna also often expressed his beliefs that the mushroom was another form of a sentient and highly intelligent organism:

“I am old, older than thought in your species, which is itself fifty times older than your history. Though I have been on earth for ages I am from the stars. My home is no one planet, for many worlds scattered through the shining disc of the galaxy have conditions which allow my spores an opportunity for life. The mushroom which you see is the part of my body given to sex thrills and sun bathing, my true body is a fine network of fibers growing through the soil. These networks may cover acres and may have far more connections than the number in a human brain.

My mycelial network is nearly immortal–only the sudden toxification of a planet or the explosion of it’s parent star can wipe me out. By means impossible to explain because of certain misconceptions in your model of reality all my mycelial networks in the galaxy are in hyperlight communication through space and time. The mycelial body is as fragile as a spider’s web but the collective hypermind and memory is a vast historical archive of the career of evolving intelligence on many worlds in our spiral star swarm. Space, you see, is a vast ocean to those hardy life forms that have the ability to reproduce from spores, for spores are covered with the hardest organic substance known.

Across the aeons of time and space drift many spore forming life-forms in suspended animation for millions of years until contact is made with a suitable environment. Few such species are minded, only myself and my recently evolved near relatives have achieved the hyper-communication mode and memory capacity that makes us leading members in the community of galactic intelligence. How the hyper-communication mode operates is a secret which will not be lightly given to humans.

But the means should be obvious: it is the occurrence of psilocybin and psilocin in the biosynthetic pathways of my living body that opens for me and my symbiots the vision screens to many worlds. You as an individual and Homo sapiens as a species are on the brink of the formation of a symbiotic relationship with my genetic material that will eventually carry humanity and earth into the galactic mainstream of the higher civilizations.

Since it is not easy for you to recognize other varieties of intelligence around you, your most advanced theories of politics and society have advanced only as far as the notion of collectivism. But beyond the cohesion of the members of a species into a single social organism there lie richer and even more baroque evolutionary possibilities. Symbiosis is one of these. Symbiosis is a relation of mutual dependence and positive benefits for both species involved.

Symbiotic relationships between myself and civilized forms of higher animals have been established many times and in many places throughout the long ages of my development. These relationships have been mutually useful; within my memory is the knowledge of hyperlight drive ships and how to build them. I will trade this knowledge for a free ticket to new worlds around suns younger and more stable than your own.

To secure an eternal existence down the long river of cosmic time, I again and again offer this agreement to higher beings and thereby have spread throughout the galaxy over the long millenia.

A mycelial network has no organs to move the world, no hands; but higher animals with manipulative abilities can become partners with the star knowledge within me and if they act in good faith, return both themselves and their humble mushroom teacher to the million worlds to which all citizens of our starswarm are heir.”