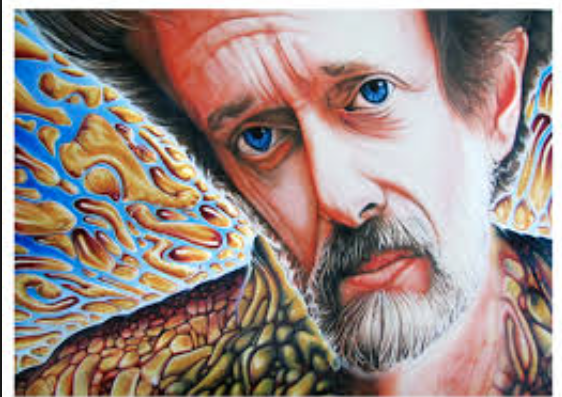 Terence Kemp McKenna was an author, lecturer, philosopher and shamanic explorer of the realm of psychedelic states. He spoke and wrote about a variety of subjects, including metaphysics, alchemy, language, culture, technology, and the theoretical origins of human consciousness. He has been described by some as being “so far out, nobody knows what he’s talking about”, and by others as “the most innovative thinker of our times”.

To shake us out of our perceptual torpor, McKenna played the holy fool, the crazy wisdom sage. He pushed our faces in the most exotic, lurid inventions of modern science and technology. What elevated him above most other prophets was that he delivered his prophesies with a wink, an implicit acknowledgement that ultimately reality is stranger than we CAN suppose.

McKenna’s métier was the spoken word — stand-up philosophy that meme-splices Alfred North Whitehead, Marshall McLuhan, James Joyce, William Blake and many others, delivered in a reedy, insinuating voice. Available throughout the Internet with titles like “Having Archaic and Eating it Too” and “Shedding the Monkey,” his lectures are tours de force of verbal virtuosity and pack-rat polymathy, leaping trippingly (in both senses of the word) from quantum mechanics to medieval alchemy, from the chaos theory of Ilya Prigogine to the neo-Platonism of Philo Judaeus.
This movie was created to present and collect (some of) his most profound thoughts, and to possibly show glimpses of the alchemical angel that Terence pursued throughout his life. It does not serve as a biography, (at least) three very important themes were left out for the simple reason that they take hours to unfold themselves: the experiment at La Chorrera, the relationship between the McKenna brothers, and the Trialogues with Rupert Sheldrake and Ralph Abraham.

And so, three books are essential to anyone who’d like to dive deeper into the life and mind of Terence McKenna:
True Hallucinations by Terence McKenna
The Brotherhood of the Screaming Abyss by Dennis McKenna
Chaos, Creativity, and Cosmic Consciousness by Rupert Sheldrake, Terence McKenna, and Ralph Abraham

Created by Peter Bergmann, this is a movie/documentary/project/amalgamation made from everything Terence McKenna left us with, mixed with the music of We Plants Are Happy Plants.

From Terence McKenna’s Eulogy to Leo Zeff:
Sometimes when Leo would sit with people, they would come out of their reveries and want to talk with him about what they were learning and seeing. And Leo would listen for a few minutes. But he then would always say: “That’s fine, that’s good, now return to the music.” And I think that.. I like to think that Leo has now returned to the music. And some day so shall we. And to whatever degree we follow his example life here, the passage to whatever lies beyond will be made much easier.
Leo showed the way, because Leo knew the way. And I salute him for that, I say for all of us who were his tribe: Goodbye to the secret chief, goodbye to the man who saw most deeply. It’s now for us to do as he would have had us do.