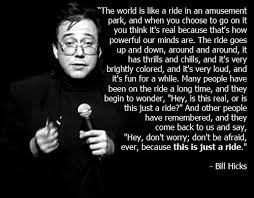 “Today a young man on acid realized that all matter is merely energy condensed to a slow vibration, that we are all one consciousness experiencing itself subjectively, there is no such thing as death, life is only a dream, and we are the imagination of ourselves. Heres Tom with the Weather.” _Bill Hicks

One of the most powerful weapons a person can wield would be an opinion, not one that comes from an external source, but instead one that swells from within the dimensions of self. Bill Hicks was a man who used his opinion to modify the manner in which people viewed the word. He was born William Melvin “Bill” Hicks, on December 16, 1961. Hicks was a musician, a social critic, satirist, and comedian. He used his gift of humour to encode his controversial opinions on politics, religion, philosophy. Hicks rallied against the deceptive manner in which the ruling class via the use of media, manufactured popular culture aimed at keeping the mass of humanity in lower rungs of mental evolution.

Here’s a full show by the man himself: