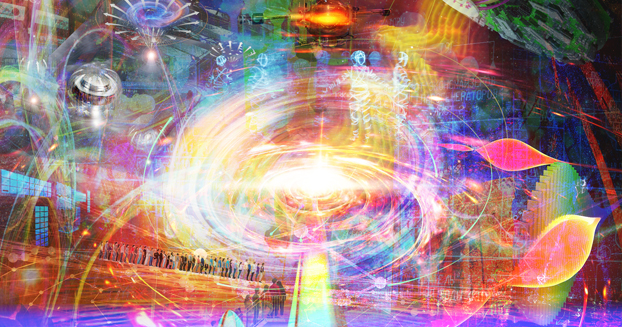 
He observed a luminescent escalation on all levels of existence and in particular the photon wave in dimension 8 generated previously unknown waveforms as if this creative energy boost module of evolution wanted to prove its existence legitimately.
Soltek just wanted to breathe on and through, if there wouldn’t have been that phenomenon at level 9, that seemed to exert such an obvious vacuum resonance on the previous action levels and sheer impossible to locate. As it began to crack, it felt as if the whole system itself would turn off the juice, or saw on the very branch on which it sits.
The sub bass thrust seemed to come straight from the centre of the galaxy and its purity of light surpassed anything ever measured.
By far past the question of whether good or bad. What is there is, because it is there and what is there must be good just because it is there or otherwise it wouldn’t be there.
Basta! Nevertheless, the sound nerds from level 7 completely lost their orientation and voluntarily returned to get in line at the very front.
Soltek would have liked to lament something else, but all grid anchors were moved. Based on that new situation, no plan fit the other and it took a completely new yet unknown strategy, which wasn’t to be found in any cosmic star traveller handbook.
It was the hour of the pioneers and the top degrees of the swot pioneers, which huddled around the heated chair in the hall of the golden ray of red. The general excitement increased to the immeasurable and the followers of the primal sound cult were increasingly in trance ecstasy and compressed the atmosphere of the room in a bioenergetic super twitch.
Everything became one and everyone realized that from now on, together with many, they would be bound together, indissolubly permeated and mingled to form a new energy entity.
The medium-heavy eternity spread faster than he could think and only his categorical agreement in the course of things allowed him to process the current events with benevolence. It was as if the veil of infinity tore open and gave a view to the sources of cosmic weather conditions, that no one had ever suspected before.
Even god had become curious and he also decided to breathe some of this remarkable prana