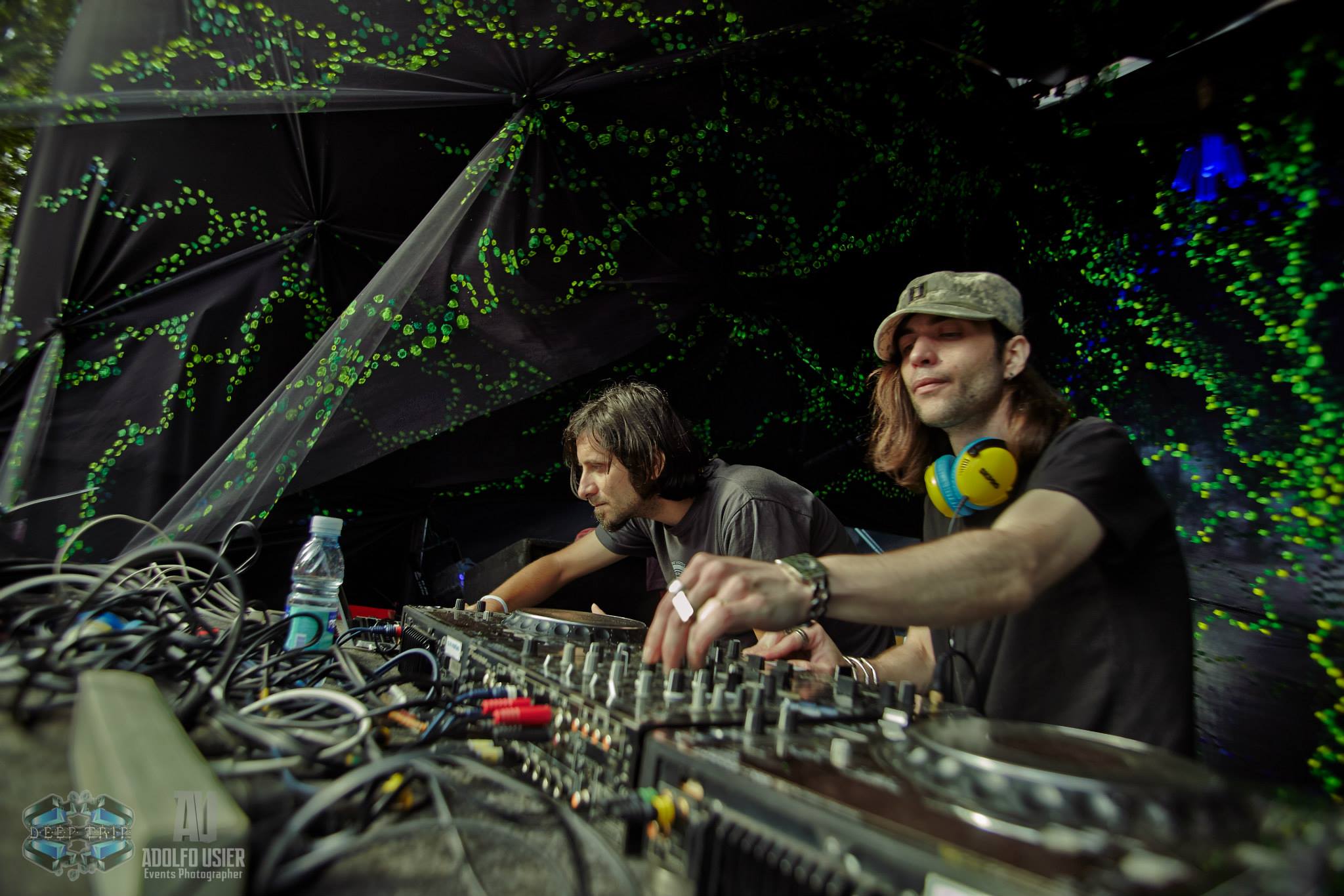 Ex-Gen or Extreme Genetics is a 3D Vision Recordings band hailing from Barcelona, Spain. With a sound characterized as Hi-Tech or Night Full On their music has dangerous high levels of energy, power and solid low frequencies integrating both organic and digitalized knowledge of music production with the aim to give a deep and intense ultimate experience to listeners.
The band is formed by Dj. Nanuk@Manuel Martí & AumProject@German Martinez part of 3D Vision Rec since 2k8 and partners in Dropland Rec, they have already released in some of the most famous labels in the genre such as: Timecode Rec, Fractal Rec, Ultravision Rec, Replicant Rec, just to name a few.

Their Genetic Music Research has made them work and share lab’s with sound scientists such as Absolum, Lost & Found, Smashed, Khopat, Compressor or Domi Pastor. Also their Extreme Sounds have already been designed and tested in different parts of the globe: from Osaka (Japan), Tijuana and Rosarito (Mexico), London (UK), Zurich (Switzerland), Lisbon and Oporto (Portugal), Ibiza, Barcelona and Malaga (Spain).
We are NOW ready to perform and do our genetic tests on YOU.
See u on the dancefloor //////////////////////////

Tell us a little about you and your work:
I am Manuel Marti Valls my partner is German Martinez Garcia, together we are known as EX-GEN. We are based in Spain, working for a Well known label called 3D Vision Recordings as well as owner’s with SMASHED and DOMI PASTOR on spanish psytrance digital label called DROPLAND Records. We’ve been active on this project since 2007 and all our tracks are signed under our label but, we’ve released music on labels such as FRACTAL REC, REPLICANT, TIMECODE and ULTRAVISION.

Currently what projects are you working on? And what future plans have you chalked out for yourself?:
[Manuel Marti Valls] I have a side project under the name LE MANUEL where I play techno and tech house. Ive been djing psytrance since 99 and working as label dj for 3D VISION under the name NANUK. [German Martinez] Under the alias G Martinez I play house and techno, Ive been producing full on psytrance since 2001 under the name AUM PROJECT, releasing on labels such as DROPLAND, FLYING SPORES and MAGMA. Concerning future plans we aim to Conquer the world. Hehe! just kidding, basically to have fun with what we are doing, continue to make more and even better music every day lastly to play around the World touching people with our music.

What influenced you to get into your field?:
As a reference we have our boss, a friend Chrisoff ABSOLUM. Most of our inspiration comes from the music his released and the standard he has established 3D VISION. It’s an honour to work for him and on a label, we always had a lot of love and Respect for.

As an artist, what role do you think you play in society?:
To get people dancing and having fun. It is quite necessary, don’t you think? 🙂

You obviously love what you do…but what do you love the most about your work?:
Playing around with sound, making people burst in excitement when they hear us play. There’s a significant amount of happiness knowing that people appreciate your music and just that reassurance is rewarding. Everybody has to start somewhere, usually at the bottom, nothing comes easy in this life.

Everybody has to start somewhere, usually at the bottom of the ladder, either as the bus-boy or the shoe-shiner. What was the very first job you had?:
[Manu] I was the pizza delivery guy. [German] I worked in a Warehouse.

Everybody’s got favourites…so what’s your favourite work/piece among everything that you’ve designed/produced/dj-ed/created? (Link us up!):
A colab track named “high in chicago” with ABSOLUM. It was our first release under 3D Vision, and still till today its rocking in all our live acts.

Name a few of your all time favourite tracks. (From other artists if you are producer).:
– The Delta – As I Child I Could Walk On The Ceiling [Blueroom] – Absolum – On The C Side [TIP.World Rec.] – Infected Mushroom – Psycho (Live Mix) [Balloonia ltd.] – GMS – Snorkel Blaster (GMS Remix) [Spun Records] – C.R.M.B – Wonders [3D Vision]

Flash-forward in time. You are now really old. What would you tell your children/loved ones?:
If we pass away, Make a big and noisy party just the way we would have.

Into the time machine again. What do you miss about being a kid?:
[Manu] Longer days, and a lot of free time. [German] The joyful and the never ending creativity everyone has when you’re just a kid.

Excessive chopping dulls the axe. Time-outs are a must. What do you do when you take time off from creating? Got any hobbies?:
X-box, promo, promo, promo, eat, sleep, promo, some work for our label, and hear some non psytrance music, go for a walk with our cute and nervous dog (Kira) , watch some series, or movies. Nothing special in the end…hehehe

What’s the last movie/T.V show you saw or book/magazine you read?:
[Manu] Im officially addicted to “Sons of Anarchy”, “Vikings”, “Naruto”, “The Strain”, “Walking Dead” etc so i have some quality time 20 or 50 minutes every time there is a new episode. About books the last one i read is “Valis” from Philip K Dick, im a big fan of sci-fi and horror stuff, so i fall really easy with these kind of books [German] Well, it’s funny but, the last thing I read was kind of short kids tale written by Manu. I was on the plane, I opened my laptop and I saw the tale on my desktop. So, I started reading it and I have to say that it was fun…hehehe… It was a long time since I read literature and maybe I will start to appreciate it more often.

Name your all time favourite movie/show/book.:
[Manu] Film, maybe “Spirited Away” from Hayao Miyazaki. I love Ghibli Studio. Books, The full Vampire collection from Ann Rice is my survival book for a desert island. [German] Akira (Katsuhiro Otomo). It was quite impressive in my early teenage years. I was going nuts with the japanese animation at that time.

With all the X-men and heroes running around. Us mortals would like some powers too. What one superpower would you choose?:
[Manu] I don’t mind, a noisy one can be cool enough. [German] Any superpower would be more than welcome…hehehe

The genie comes out of the lamp and grants you one wish that will change the world. What would you wish for?:
Free wi-fi everywhere… Who believes in genies in the 21th century?? hehehe

How do you connect to the spiritual side of yourself?:
We are not so spiritual, let’s say we are more digital. So, we try to find our inner calm with nice music, some tasty food, friends, and a nice environment. Sometimes, small things are the best in life.

Are you pro-weed culture? Why do you think the majority of the population goes against the green?:
In Spain, It’s not legal, but it is tolerated and there is a legal law that allows the people to grow for their own consumption. We have close friends that are running the biggest grow shop the south of Europe (www.labonaherba.com). In our opinion its not poisonous, it helps with creativity in many ways, proven to cure Cancer patients and if it is legalized it maybe is the answer to this crisis.

Any ideas to rectify this mindset?:
Just one, To show more respect towards each other. Whether a weed smoker or not.

At the end of the ride, everyone’s looking for some form of success (tangible or not), what does success mean to you?:
To be happy and secure, working on things we love and to make people happy. Its that simple! 🙂